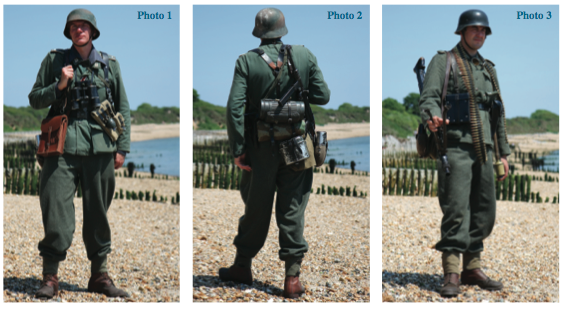 One major improvement in 1944 was the range of small arms available to the infantryman; the Mauser K98 bolt-action rifle was still the standard issue weapon however each Gruppe (Squad) carried an MG42 machine gun with the fearsome rate of fire of 1,200 rounds per minute – over double that of the British and American machine guns. Semi-automatic rifles such as the G43 started to appear on the Western Front too (they had been tested on the Eastern Front) and later the revolutionary MP44 Sturmgewehr – the world’s first true assault rifle. The individual German infantry soldier was now also able to take on Allied armour by use of the Panzerfaust single-shot anti- tank rocket projector which could easily knock out a Sherman or Churchill tank at close range.

Thus the German war machine rather belatedly sought to increase the firepower of the infantryman in an effort to make up for the lack of tanks and aircraft at the front. Most German infantrymen walked by 1944, some horse-drawn transport was still available whilst the luxury of armoured half tracks was reserved for the elite Panzergrenadier regiments. Photos from the Normandy front show infantry- men pushing their equipment and heavy weapons along in dog carts or prams, but in most cases they marched with everything on their backs, much like the Legions of Rome hundreds of years before. 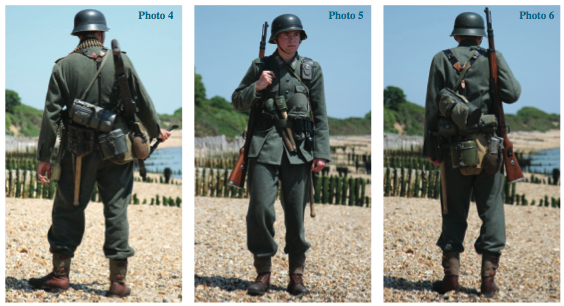 The backbone of the German infantry unit in Normandy was the Schuetzengru- ppe (rifle section) each consisting of nine men; the Gruppenfuehrer’s (Squad Lead- er), MG Nr.1, 2 and 3 plus 4 riflemen and the Truppenfuehrer (Troop Leader) who was the section’s second in command.

An Unteroffizier (Lance-Sergeant) would normally lead a Gruppe but the re- ality was that there were never sufficient NCO’s to fill the positions, and it often fell to the Gruppe number two, the Trup- penfuehrer to lead the Gruppe. He was inevitably an Obergefreiter (Corporal). As Gruppenfuehrer, it was his task to lead the Gruppe by example. He was responsible for his men’s welfare and for not getting them killed if it could be helped. The Gruppenfuehrer was to direct the fire of the MG42 while the Truppenfuehrer took responsibility for the riflemen. They were to carry out an assault supported by the MG, or to defend and supply the MG, as each occasion saw fit. The MG42 was the cutting teeth of the German infantry in battle. Unlike in Allied rifle sections, the MG did the fighting, rather than act as primarily a support weapon. The best man with the MG42 became the Rich- tschuetze or ‘nummer ems’ while his loader was simply called ‘nummer zwo’. He carried spare barrels and ammunition for the MG, and was constantly alongside the weapon. A third soldier, ‘nummer drei’ was responsible for reserve ammunition for the MG. Collectively they were known as the ‘MG Trupp’.

The rest of the riflemen, known as the ‘Schuetzentrupp’ would have also carried belts for the MG (photos from the Normandy front show virtually every infantryman carrying either an ammunition box or a belt of 100 rounds draped over his shoulders) and essentially at least one large spade for quick digging in. To complete the Gruppe, weapon capability, hand grenades and Panzerfaust were readily available.

This combat experienced Feldwebel (roughly equivalent to a Sergeant-Major) wears the Model 43 tunic made from HBT material, more comfortable in the summer heat. The shirt collar is worn outside as per regulations. He has short ankle boots and canvas and leather gai- ters which were intended to replace the earlier expensive marching boots (‘Jack- boots’).

He wears standard combat equipment for his role; leather belt, cartridge belt suspenders (‘Y’ straps), gasmask in its canister, a rolled shelter quarter (Zelt-bahn), mess tins and water bottle attached to his bread bag, 7×50 Dienstglas binocu- lars, one half of the magazine pouches for his MP40 machine pistol and a map case (Meldekartentasche) unusually here in early-war tan leather. He is also armed with a P-38 Walther pistol and his M40 steel helmet has been hand painted in a tri-colour camouflage scheme, quite common in Normandy.

As Zugfuehrer, he would normally be in command of three Schuetzengruppen.

The Richtschuetze was usually the stead- iest man in the Gruppe selected because he could efficiently and effectively oper- ate the fearsome MG42. Our recreated Richtschuetze carries the special MG Gunners tool kit (Werkzeugtasche 34) on his right side and a Walther P-38 pistol as a back up weapon. He also has an M43 stick grenade hanging from his belt. He wears the standard wool field grey uni- form and short boots with gaiters. He has the standard equipment with a folding en- trenching tool plus a belt of 200 rounds of 7.92mm draped around his neck ready to load into his MG42.

His steel helmet is the M42 ‘raw edge’ pattern in dull grey finish and without the early-war decals which were no longer issued at this stage of the war.

This young draftee has been issued with the very latest pattern of the field grey wool uniform that first appeared in late 1943 including the peaked Einheits- feldmuetze cap tucked into his belt. The tunic has plain patch pockets and a six- button front closing.

He also wears the M42 steel helmet (Stahlhelm) to which he has added a rub- ber band cut from an old tyre inner tube for affixing foliage.

He has a field torch buttoned to his shoulder strap – these came in very many patterns and some having red/green and clear lenses for signalling purposes.

He also wears the short ankle boots which were issued in natural leather flesh- side out and then either dyed black or just oiled by the soldiers as shown here.

He has two type 24 stick grenades in his belt as well as one M39 egg grenade at- tached to his left hand rifle ammunition pouch.

He is armed with the Mauser K98k bolt- action rifle; the standard issue German infantry rifle of WW2.