Early Saxon Battlefields of WessexAfter the fall of Ceawlin at Wodensburg AD592, the westward expansion into what is now Somerset seems to have stopped altogether, until the arrival of Cenwalh, succeeding his father Cynegils as king of the West Saxons in AD643. Raised as a Christian, Cenwalh’s first action on taking the throne was to immediately renounce the new religion and return to the Gods of his forefathers, publicly repudiating his wife, Queen Seaxburgh, at the same time. This was an idealistic and rash move, as his wife was the sister of the ferocious King Penda of Mercia, who promptly avenged the slight to his house and drove his errant brother-in-law from his throne.

Fleeing to East Anglia, Cenwalh spent three years plotting to retake his kingdom and return to the Christian faith, and doubtless it was the threat of renewed violence from the Mercians that persuaded him to take back his wife. He retook his throne in AD648 through careful diplomatic negotiations organised by his nephew Cuthred and made public show of his renewed piety by a vigorous church building scheme in Winchester. 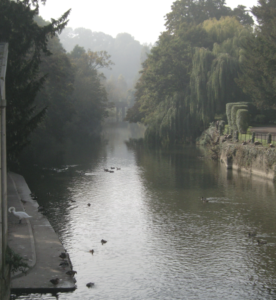 Crossing the Avon at Bradford

In AD652, according to the Anglo- Saxon Chronicle, Cenwalh engaged and defeated an enemy at Bradenforda þe Afne (Bradford-on-Avon, Wiltshire). It is not clear who the enemy was, but the twelfth century writer, William of Malmesbury, suggests that it was the native British that were fought, and that the battleground was called Wirtgernesburg (Vortigern’s Stronghold). Wirtgernesburg has been identified as Budbury Camp, a hill fort overlooking the river crossing at Bradford-on-Avon. It seems likely that any stronghold connected to the name of Vortigern, the semi-legendary fifth century British King, would have been a major power base for the indigenous British, of symbolic as well as strategic importance. What better way to underline one’s power and right to the Gewissan (Early West Saxon) throne, than to inflict a crushing defeat on a convenient foe, and oust them from their fortress? Thus Cenwalh recommenced the conquest of what was later to become Wessex.

In AD655 Cenwalh must have breathed a sigh of relief when his terrible brother- in-law Penda of Mercia was killed at the battle of Winwæd, and Peada, Penda’s son, took the Mercian throne. Peada did not last long, being murdered in AD656, and hopes of northern expansion into Mercia must have flickered in Cenwalh’s mind. These were quickly extinguished as Wulfhere, another of Penda’s sons, succeeded to the Mercian throne and proved to be just as bellicose as his father. It was southwards again that the Gewissæ must strike to gain land and power. 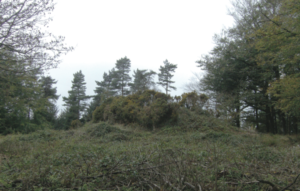 The real advance took place in AD658, when Cenwalh won the battle of Peonnan. The Anglo-Saxon Chronicle records the victory, “In this year, Cenwalh fought against the Britons at Peonnan and put them to flight as far as Pendridan.” There is a good deal of debate about the location of Peonnan, and, as with almost all sixth and seventh century battlefields, one must resort to educated guesswork to decide their whereabouts. The most likely place is near the village of Penselwood in Somerset, which is situated at the south end of a two mile long ridge, very close to the meeting place of the three counties of Wiltshire, Dorset and Somerset.

There are two hill forts situated to the north of the village, one at the tip of the ridge on Pen Hill, and the other known as Jack’s Castle where the ridge swings eastwards. Within the ramparts of Jack’s Castle is an impressive Bronze Age tumulus, which would have been visible for miles around when the fort was in use (the entire ridge is now covered in commercial forestry). An ancient road – the Hardway or Herepath (warpath) – runs adjacent to Jack’s Castle and it is here also that Egbert’s Stone may have stood, the site where Alfred raised his standard against another wave of Germanic Invaders, the Danes, in AD878. 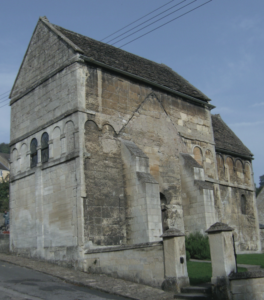 Saxon Church at Bradford on Avon

We can again see a pattern emerging as at Wodensburg AD592 (see Skirmish Issue 54). We see martial engagements occurring at sites that were clearly recognised as being important for some reason, both by the Germanic Saxons and by the British, possibly on ritual or religious grounds, as well as being of tactical significance. There is a prominent barrow belonging to an earlier culture; an ancient trackway; a hill fort or defensive structure; and significantly, evidence of more than one major battle taking place at the same site, for at Peonnan, blood was again spilt in AD1016 between Edmond and Canute.

The British were indeed fighting in the heart of one of their most significant kingdoms, Dumnonia, within sight of Cadbury Castle, which, like Wirtgernesburg, could have been the capital of a semi-mythical British leader. Cenwalh, however, was once again the victor, and the British army was scattered and sent fleeing as far as Pendridan (South Petherton), where the Hardway crosses the River Parrett. With these victories to his name Cenwalh had firmly cemented himself on the Gewissan throne.

Bradford-on-Avon is a pleasant town in northeast Wiltshire, easily accessible by road or rail, and indeed the best place to park a car is in the railway station carpark. From here one can look north and see the ranks of seventeenth century weavers cottages on the hillside known as Tory. These are built on the slopes of what was once Budbury Camp or Wirtgernesburg and it is an interesting walk to the camp itself. Proceeding from the car park towards the town centre one comes to the Avon crossing, now a bridge spanning the river built over the remains of a thirteenth century structure.

Now follow the signs to the Saxon Church, a tenth century edifice built on the foundations of the early eighth century church erected by Aldhelm, no doubt to commemorate the victory of Cenwalh. From here, at the foot of the hill leading up to Wirtgernesburg, one can make ones way up through the very narrow and winding footpaths to the hillfort itself. Sadly it is now entirely built over, but from the footpath behind the weavers cottages one can look out over Bradford and beyond as far as Westbury and Edington, and it is easy to understand the situation of the fort, holding such a commanding position.

Peonnan (Penselwood) is a much more rural location, and an exploration of the area on foot is well worth a day’s walking. Proceed by car down the B3092 from Frome towards the National Trust Gardens of Stourhead. Before reaching them, however, turn right at the signpost for Alfred’s Tower and follow the narrow lane (part of The Hardway) as far as the car park for the eighteenth century folly. This car park is actually in Jack’s Castle, and a few minutes walk through the plantation will take you to the Tumulus (National Grid Reference ST 745354) on the brow of the now heavily forested hill fort. From the summit of the tumulus one can just see through the trees to the rolling fields of Dumnonia beneath. Across the Hardway stands the imposing Alfred’s Tower, built in the eighteenth century by the then owner of the Stourhead Estate. Heading into the forestry woodland South of the tower one can follow the footpath to Pen Hill Fort which still has well defined embankments and then on, to the village of Penselwood itself.