Even on a grey, cold and rather miserable February morning the first sight of the Matthew was very welcoming. Partly, the feeling came from the volunteer crew who plied me with hot, sweet coffee but also the gorgeous colour of the timbers, the paintwork on the foc’sle and sterncastle and the spider’s web of rigging, which gave the ship a festive air. The Matthew is not a beautiful ship in the way that the Cutty Sark or other great tall ships are, it is however purposeful and full of character.

For those who do not know, the Matthew is an interpretation of the ship in which John Cabot, a Venetian citizen and adventurer, sailed across the Atlantic to Newfoundland in 1497. Built in, and sailed from, the important medieval port of Bristol, it began the long tradition of Atlantic crossings from Bristol and Eng- land that led to the establishment first of colonies and then the colonising of North America. This led to Bristol developing as the country’s major transatlantic port, until ironically Brunel’s own great ships led to the trade moving to Liverpool as Bristol’s difficult tidal navigation proved impossible for the magnificent new iron ships … 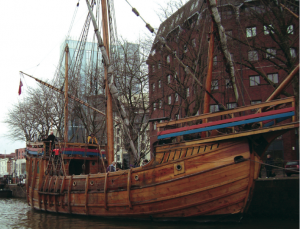 The Matthew is one of the keys in understanding the history of Bristol and the Bristolians recognised that when they contributed to the building of this new Matthew. Laid down in 1994 it was afloat in 1996 and was able to take part in a transatlantic crossing in 1997. There she met the Queen on the other side of what is still rather more than a pond, if you are in a 68 foot long wooden craft and not a jumbo jet flying in the upper atmosphere. There are few contemporary records of the original vessel so Colin Mudie, the noted yacht designer, took archaeologi- cal examples such as the Mary Rose, as well as contemporary illustrations, to produce his interpretation of a caravel. With relatively bluff bows and a fine line to the stern she is very ’tender’ craft li- able to ‘rock and roll’ in a sea. Fitted with a spritsail, square foresails and mainsails and a lateen mizzen, she has the balanced sail fit that made Tudor ships such capa- ble vessels. The ship had considerable carrying capacity, but this was designed for cargo rather than the crew, who would have had to seek shelter on the deck, or in the Fore and stern castles, if they were lucky. Fitted with almost 20 tons of lead ballast and a false lead keel of ten tons she is a good sea boat. Downwind and in front of a 20-knot ‘decent blow’ she can make seven or eight knots according to her current master Rob Salvidge, who has the rugged good looks of Sharpe matched to the dress sense of Captain Jack Sparrow.With a hull con- structed mostly of massive oak tim- bers and carvel planked with Douglas fir she is a strongly built ship that has sailed through storms in the Bay of Biscay as well as across the Atlantic. The Severn Estuary can also be a considerable challenge for the Matthew and her all-volunteer crew. Compromises have had to be made as she is first and foremost a seagoing vessel and not an exercise in reconstructive archaeology. Her hull is held together not with wooden treenails (trenells) or iron nails but bronze bolts which give extra strength and a longer life. She is provided with modern naviga- tion and safety aids and auxiliary engines which are essential when manoeuvring in restricted waters. Historically she would have used long sweeps or oars or rowing boats to tow her. In the confined space of Bristol Docks it took considerable skill to manoeuvre what is a large vessel be- neath the arm of the raised bridge, avoid- ing it by mere inches. I would hesitate to attempt that with only oar power. Her mainmast is some 78 feet in height and is made from a Douglas fir tree donated by the Queen from the Balmoral Estate; Prince Philip, an ardent sailor, is the pa- tron of the Matthew. As part of a quid pro quo some of the oak set aside for her construction found itself used in the re- building of Windsor Castle after the dis- astrous fire.

The original Matthew took about 30 days to cross the Atlantic and a little over two weeks to return. Cabot was accompa- nied by his barber and an unnamed Bur- gundian as well as a rather obstreperous crew who displayed unspecific mutinous tendencies. Of course they were travel- ling to an unexplored but not unknown land. In 1480 there had been a large ex- pedition from Bristol to what they called Brasell (misnamed Brazil). The Bristo- lians had discovered the massive shoals of cod off the coast of Newfoundland after the Danes had banned them from the seas of Iceland (older readers will remember a more recent Cod War 1975- 6). The wealth of Bristol and especially the finery of the merchants’ wives led to the ever rapacious Henry VII levying ad- ditional taxes on them. It was from this un-merry monarch that Christopher Co- lumbus first sought patronage for a trans- atlantic voyage. The parsimonious po- tentate rejected his plans but much later supported Cabot, a man who seemed to offer unrivalled wealth in salt cod if noth- ing else and fish was not to be sneezed at when the Church insisted on so many fast days and trade meant taxes. Henry with his usual lack of generosity and with a willingness to make others chance their fortunes on his behalf gave Cabot let- ters patent that permitted him ‘upon [his] owne proper costes and charges, to seeke out, discover, and finde, whatsoever Iles, Countreyes, Regions, or Provinces, of the Heathennes and Infidelles, whatsoever they bee’. Cabot landed in Newfoundland where he claimed the land for England and the Pope, sighted some animals and refilled his water casks. He identified his position correctly by latitude to within a few miles which says much for his navi- gational skill, although on the return voy- age he arrived at Brittany first rather than Bristol. On his return Cabot was made an Admiral and received a pension of £10 later increased to £20. His luck ran out on a second and more ambitious voyage in 1498 when he and his expedition of five ships disappeared.

Matthew is open to the public on a regular basis. Manned by 30 enthusias- tic volunteers (some of whom I had the pleasure of meeting) who can provide the visitor with a tour of the ship and are able to answer any of the myriad of questions they are likely to get. The ship is a popular venue with primary school visits which concludes with a short ‘voy- age’; how exciting is that! She is also available for corporate events, filming, private hire on short cruises and every summer there are longer cruises under sail around the British coast or this year over to France. Up to 12 passengers can be carried together with eight crew, but quite commonly passengers can become crew, after all what’s the fun of watching others work? The Matthew does require a lot of effort from its crew to keep it sail- ing well. Maintaining the Matthew is a considerable expense even if volunteers carry much of the burden. Hopefully, Bristolians will continue to see the Mat- thew as an asset to themselves and their city. She is certainly a small ship; figuratively and literally she is in the shadow of the SS Great Britain but in many respects she is an important ship both to the city and this country. Please visit her and give her my love.

With thanks to Joe….. Rob Salvidge, Mike Lear and the other volunteers of the Matthew I met on a wet Thursday.
The Matthew is a ship and therefore can, and will, be away from her moorings dur- ing the year. Please check before visiting to avoid disappointment.