The Château de Castelnaud has had a long and complex history. Built at an important strategic position overlooking the Dordogne and at the junction of two valleys, its command of the surrounding territories makes it worth visiting for the views alone.

Castelnaud or ‘New Castle’ was begun at the beginning of the 13th century. It was seized by Simon de Montfort in his campaign to crush the Cathar heretics and although recaptured later, was re- built virtually from scratch in successive centuries. During the Hundred Years War the area was hotly contested and Castelnaud changed hands by force, favour and thievery on seven occasions, until it was finally sold into the hands of the French monarch in 1442 for 400 pieces of gold.

The ending of the war began one of the most interesting periods of construction when it was refortified for the use of artillery. As well as some minor towers a major artillery tower was constructed and this remains the most prominent feature of its defences. The castle was too strong to be attacked in the French Wars of Religion (late 16th century) and it survived this conflict unscathed. Over the next 300 years it ceased to be of military or domestic importance and was slowly robbed of its stone. Its remote position made it difficult for this to be accomplished with ease so when its present owners acquired the property in the 1960s it was remarkably intact. A programme of conservation and restoration began, together with its development as a museum of medieval warfare opened to the public in 1985.

There are few places where Renaissance artillery towers remain intact; you may remember I described a ruined one at Berwick in a previous article. As an early solution to the challenge of artillery they were widely employed, until the trace italienne or angled bastion replaced them. After scrambling through the monumental artillery tower at Castelnaud what surprised me is not that they were not used more widely but they were used at all! The necessity of having a monstrously thick wall to defend from artillery fire meant that the working space inside was cramped and the field of fire utterly inadequate, unless your enemy was complete- ly cooperative. How the volumes of rank powder smoke were ventilated from such small spaces is also unclear. They had, very sensibly, placed the powder magazine away from the gun decks. The magazine was built with thinner walls and any fatal explosion would have blown it, but not the tower, to pieces. There are examples of original and reconstructed fortress pieces in situ, including a scaled up arquebus – the massive arquebus-a-croc, as well as wrought iron pieces equipped with removable chambers. 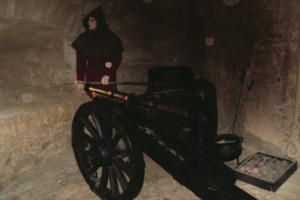 Although well equipped with artillery it is doubtful whether the tower could have suc- cessfully defended itself against assault.

The museum is organised logically, with each room focusing on one aspect of warfare. Adjacent to the artillery tower is a display which deals with development of firearms and contains a number of really interesting items. One is an original volley gun with its 12 barrels arranged in a fan shape. Almost certainly completely useless in action, it is an original weapon although now fitted to a carriage based upon a design by Leonardo da Vinci. There still remains some colour on the vermillion and green 66cm long barrels, each with a diameter of 16-18mm. Alongside this pretty piece was a display of what appeared to be cast iron jugs, which at first I thought were chambers for 15th century wrought iron pieces but were, in fact, simple signalling devices. They also had some very thick walled wrought iron chambers which were petards or demolition charges, designed to be jammed against doorways which would then be blown in.

There are three rooms dedicated to medieval arms and armour as well as a further display in the armourer’s workshop. The quantity is not great but the quality is excellent. The mail and plate armour is in superb condition 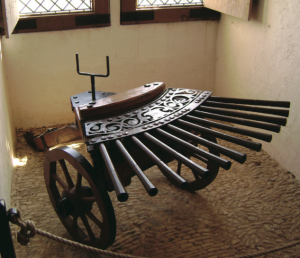 An intriguing novelty rather than a practical weapon, such toys captured the military imagination of the time.

and certainly not for show but for war, as are the other weapons on display. There is a fine stand of staff weapons of all the different forms that I could recognise, although whether there will ever be agreement on their typology is unlikely. There are bills, parti- sans, halberds, bardisches and corsaques, amongst other wickedly designed types. There is also a lovely little 16th century ivory archer’s bracer or wrist guard with St George and the Dragon carved on it on display. Accompanying the displays were helpful videos illustrating the arms and equipment of the medieval soldier and it’s employment

There is a room dedicated to the crossbow and for enthusiasts for this weapon there is much to see. All the different types of prod or bow and methods of cocking them are to be found in the many excellent examples. They are perforce mostly civil types and later than the period we would happily include in the Middle Ages, but they do demonstrate what a remarkable weapon it was. Even I could see that in the hands of a determined foe the crossbow would have been a deadly and powerful weapon and ideal for use in a siege. Try shooting a longbow or a cross- bow through an arrow loop; I have and the crossbow is the only practical option.

The civilian aspect of the period is not ignored with one room fitted with original medieval furniture including coffers and chairs. There was also during our visit a very competent seamstress making up a child’s cote. There are daily displays during the summer season of skill-at-arms and other martial and civilian activities. 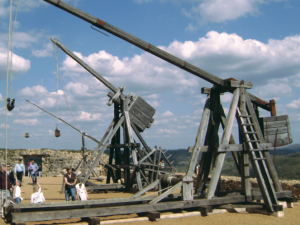 Battery of trebuchets, an impressive sight in a beautiful setting.

I have a passion for the trebuchet, the heavy artillery of the Middle Ages. They have a room dedicated to beautifully made scale-models of a wide range of these machines, as well as an informative audio-visual display. At Castelnaud they have five of these wonderful machines and they look great. One is a small ex- ample for demonstrating to the public. It is fascinating to see how they have dealt with the various design problems and where they have come to similar and different conclusions. This example is shot everyday at a scale model of a castle, to the delight of the public. I would divide trebuchets into two simple groups: those operated by hand (traction trebuchets) and those using a counterweight or gravity. In the latter category there are those with fixed counterweights and those with swinging counterweights. Those with a fixed counterweight tend to operate better if fitted with wheels; one of my larger ten-foot-high models operated on this principle and worked well.

In Castelnaud there are two traction trebuchets, one fixed counterweight and one moving counterweight gravity powered. Rather confusingly they call the fixed counterweight machine a mangonel, a term we would normally use to describe a single-armed torsion powered weapon. The smaller traction machines are well constructed workmanlike machines, ca- pable of hurling 1kg projectiles at 90 miles an hour; not a real threat to a castle but certainly a danger to roofs, hoard- ings and larger siege machines (and anyone unfortunate to get in the way). The larger of the two would be quite capable of causing substantial damage to a castle wall. Their designer, Renaud Beffeyte, designed the massive moving weight trebuchet beside Loch Ness as part of the fascinating project organised by Nova to see how effective 200 pound balls at 120 miles an hour would be and achieved devastating hits. These machines, although smaller, are hugely impressive. Alongside them are the essential accompaniments to a siege, a moveable protective mantlet and then, at the rear, the latest innovation, a bombard. Well made but on a rather flimsy mount, the bombard did not revolutionise warfare as one might have expected. It was smaller, lighter and more robust than a trebuchet but it still projected stone balls at relatively low velocities. This is why the trebuchet remained for so long in the siege lines alongside its erstwhile replacement.

The Musėe de Guerre Medievale is well worth a visit if you are in the area. It is a part of France which is close to a period that still holds many of us in fascinated thrall. In their markets you can still buy the spices that a medieval merchant would have known well and on the shelves of local supermarkets you can buy bottles of delicious medieval spiced wine known as ypocras. It is easy to imagine yourself in a rich and fascinating world not lost long ago but still discernible in this region. Bon voyage.