Over the years I have been lucky to have piloted, or flown in, a wide variety of aircraft: Chipmunks, Cessnas, Beechcraft, Gliders, Balloons, and even myself in a freefall! However, the “Holy Grail” for me, was to fly a Spitfire.

I say “a Spitfire”: the Spitfire was under continuous development throughout the Second World War and, in total, there were 24 variants. In March 1936 the Supermarine company, of Southampton, delivered the Spitfire prototype KV505 for its flight tests. Following those tests, and the incorporation of a number of modifica- tions – mostly to facilitate mass production –the Spitfire MK1 was born. Reginald Mitchell, the Spitfire’s designer, did not live to see his creation enter service – he died of cancer on 11 June 1937, aged only forty-two. However, the Spitfire name was described by Mitchell as “Just the sort of bloody silly name they would give it” – it was very nearly called the “Shrew”! Legend has it that Sir Robert MacLean, the head of Vickers Aviation (who owned Supermarine), named the aircraft after his daughter whom he described as “a little Spitfire”.

The advanced design led to numerous delays in production, so the first production Spitfire did not arrive until May 1938, with the RAF taking delivery of the first aircraft in August. The Hurricane by comparison was easier to produce; so during the Battle of Britain, Spitfires only accounted for 38% of Fighter Command’s strength. However, they shot down 43% of the Luftwaffe aircraft destroyed. After the battle, it became apparent that the Spitfire design was superior to the Hurricane’s, and the Hurricane was modified to a “tank buster” ground attack role. The Spitfire’s design and internal strength was so far in advance of its time that in 1944/45 a MK XI Spitfire was modified for high speed tests and in a dive reached mach 0.92 (620 MPH) – until the f-86 Sabre jet was intro- duced, no other aircraft could catch a Spitfire in a dive.

The subsequent Marks of Spitfires were developed in response to:
– Luftwaffe advances (e.g. the FW190),
– specific mission requirements (e.g. Photoreconnaissance)
– or to accommodate technological improvements (such as replacing the Merlin with a Griffon engine).

A lot of the time a visual inspection, such as a Luftwaffe Pilot would get, would not allow you to differentiate between the Marks (for example, a Mark V and a Mark IX are visually similar in flight). An inter- esting side note is that during the 1948 Arab-Israeli War, the Israelis used Avia S- 199s from Czechoslovakia against Spitfires from the Arab Airforce. What makes this interesting is that the S-199 is a Messerschmitt BF-109 derivative!

Not all Marks are shown, but it can be seen that by the end of its development the Spitfire was 100mph faster, could climb 10,000 feet higher, and had increased its range by 1,600 miles whilst carrying an engine twice the weight of the original, all using the same basic design as the 1936 prototype!

Some 22,500 Spitfires were built but now only a few dozen are kept in flying condition. A number of Mark IXs were converted into two-seater training versions (designated T9s or alternatively T MK IXs). It was one of these that I had the priv- ilege of flying in May 2006. The aircraft designation is IAC 161, it has a Rolls-Royce Merlin 66 engine and is painted in the Irish Air Force livery. She started life as a standard MK IX at Castle Bromwich in 1944, designated PV202, and delivered to 33 Maintenance Unit (a central pool for distributing available aircraft) on September 18th before being forwarded on to 33 Squadron during October 1944. She is rumoured to have 3 kills to her credit. Sold to Vickers-Armstrong on July 19th 1950 and converted to a T9 trainer for Irish Air Corps, she became IAC 161. Sold into private ownership, repainted back to RAF colours and PV202 designation, she unfor- tunately crashed at Goodwood Airfield on 8th April 2000, killing both pilots. She was subsequently repaired and restored to her former glory. In theory, a Mark IX is capa- ble of a top speed of about 410 mph at 25,000 ft and can fly to a maximum service ceiling of 42,000 ft. The T9 variant is slower than this due to the increased weight and the additional canopy. However, given the value of these aircraft (in excess of £1.5 Million each), and their ages, they are no longer pushed to their limits.

The first impression you get when climbing into the cockpit is how snug it is. A number of Second World War fighter pilots commented, “you don’t fly the Spitfire, you wear it.” There is a lot of truth in that statement, you feel part of the machine; the throb of the Merlin engine, the wheels as they roll over the grass on takeoff, and of course, what the aircraft is doing during flight. During flight, your left arm constantly brushes against the side door panel, especially on turns. I have an allegorical tale that if you are flying in a modern flight suit for a reasonable length of time, that arm will have a suction mark on it where it nestles against the door panel – the skin being sucked into the join between the airframe and the door panel. On the ground the Spitfire is poor in com- parison to modern aircraft, since it is a “tail dragger” – that is to say that the nose points up into the air while the tail is dragged along the ground. Most modern aircraft are tricycle arrangements (also known as three point) so that on the ground the aircraft is horizontal and supported on three wheels. Given the huge size of the engine, the pilot being low down in relation to the engine, and the large elliptical wings, forward visi- bility is restricted and the pilot has to weave the aircraft from left to right to get an idea of what is in front. When accelerat- ing down the runway you have to look out of the side windows to keep the aircraft straight – until the tail lifts. In fairness, these comments should be applied to all ofthe Spitfire’s peers – Messerschmitts, Hurricanes, Focke-Wulfs etc., since they are all “tail draggers”.
Once in the air, however, the story is completely different, the Spitfire is in its element. The controls are light and respon- sive, surprisingly light given that there is no servo assistance. The visibility is first rate, the controls are smooth, and the air- craft is eager to respond. A small movement on the spade control is translated into a smooth and eager movement by the air- craft. I spent approximately ten minutes flying the Spitfire, and the rest of the time as a passenger being shown what she could do by the main pilot. We performed rolls, turns, dives, loops, and, of course a victory roll over the airfield. From the cockpit (which is quite noisy with the sound of the engine and the wind noise across the access door panel), the view is fantastic. You can usethetipofthewingtofixonapointon the ground and then pull a smooth turn onto a new heading. Flying inverted (for exam- ple at the top of a loop) you move your head and keep your bearings quite easily, in fact you spend most of your time looking outside the aircraft and only glancing at the instruments occasionally, which is what you are supposed to do!

The comment “you don’t fly the Spitfire, the Spitfire flies you” is remarkably accurate, she almost seems to know what you want to do, almost before you start the manoeuvre. You get the feeling that somehow Reginald Mitchell gave this aircraft a soul. Whatever the reason, she is a pilot’s dream, so long as you treat her kindly she will look after you. I cannot comment on what the aircraft is like under battle conditions (where you take her to the design limits); but given the outcome of the Battle of Britain, I feel safe in stating that she will perform magnificently.

From a pilot’s viewpoint, the effectiveness of an aircraft depends upon the task the aircraft needs to perform. The Spitfire was designed to be a fighter aircraft and so had to perform aerobatic manoeuvres, have good visibility, be a stable gun platform and be able to reach the targets. As we know, from history, the Spitfire performed this assigned task well. Its major limitation, in the early versions, are its lack of ‘legs’ (the distance it can fly on its internal fuel tanks). The Battle of Britain Spitfires (the MKIs and MKIIs) have a 48 gallon pri- mary and 37 gallon secondary fuel tanks, giving a total capacity of 85 gallons. At 14,500 feet with the throttle fully advanced the engine consumes 98 gallons per hour! At 18,000 feet with the mixture on weak, the Spitfire still consumes 55.5 gallons per hour (at take off and climb she consumes 93.5 gallons per hour). So, in practice a 1940 Spitfire has a flight endurance of about one hour, this includes getting to the target, doing battle (when you are likely to be using maximum revs) and getting back! Fortunately, the BF109 also had a limited range and could only spend 20-30 minutes over England – often they had to turn for home leaving the bombers to the RAF.

Landing the Spitfire is an interesting task. The official Air Ministry Pilot Notes (1565B), mentions that the Spitfire is easy to land, but it has a “rather bad view ahead”. The flaps are lowered below 160mph and you can rapidly reduce the air- speed down to about 110mph (depending upon your angle of approach). The engine is used to regulate air speed until, at about 500 feet, the throttle can be closed and the Spitfire glides in to a landing. The airspeed has to be kept between 80-86mph (The air- craft will stall at 71mph, with flaps down). A useful feature is that the large elliptical wings benefit from the effect of ground cushioning (called float), softening the final few feet of the decent. A three-point landing is recommended so the nose is pulled up when the aircraft is a few feet off the ground and the aim is to have the tail wheel and the two main wheels touch the ground at the same moment, but beware using the brake on full! The undercarriage of the Spitfire is narrow track and the Spitfire is nose heavy, sharp braking can cause the tail to lift and the propeller to hit the ground – making for a very interesting few minutes for the pilot! Normally the brake would be partially applied using two fingers only, and if the tail starts to lift – let go, promptly! 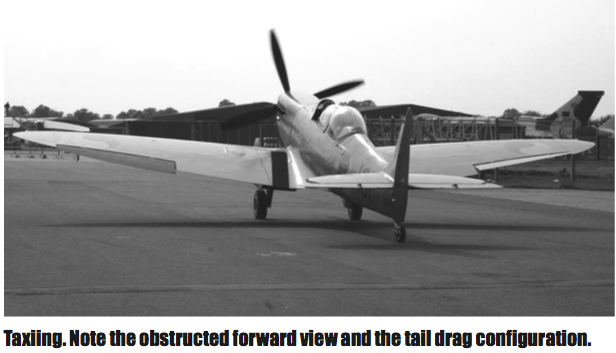 I feel privileged and very, very lucky to have been given this opportunity. Do I con- sider myself a Spitfire pilot? Ten minutes stick time does not make you a pilot but, I have flown her and performed some manoeuvres. For a brief time, there was myself, a Spitfire and a blue sky, words are inadequate to express the feeling of sheer joy that this combination gives to a pilot, something touched my soul and will never be erased. Now that I have flown in a Spitfire, would I do it again if the opportu- nity presented itself? Yes, like a shot!! If I won Euro millions and could afford to buy one, would I? Yes! In fact, I would be standing at the door with a case full of money the next morning, it is that good an aircraft. To quote Jeremy Clarkson in his book ‘I know you got soul’, “Possibly, just possibly, the Spitfire is the greatest machine ever made.” From my viewpoint there is no possibly about it.