WIN! Into the Valley of Death by Louise Berridge

Win a copy of Louise Berridge’s new novel out this month, Into the Valley of Death! 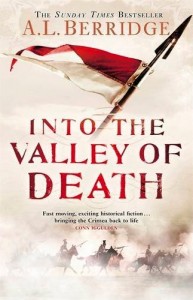 Answer the question below to win!

1854 – The Allied armies prepare to besiege the Russian stronghold in the Crimea. Harry Ryder is a maverick hero. Resentful of the army that destroyed his father and his own career, he has no time for incompetent commanders. He clashes with his superiors as fiercely as he fights the Russians.

Four men, one woman and a game of cards will change everything and alter the course of a war. Something evil has crept into the ranks of the British Army’s own officers, an unknown enemy who plans lure men to ruin on the battlefields. The only path to victory lies in uncovering the truth, but to find it and confront his own destiny Ryder must charge with the Light Brigade into the Valley of Death itself…

To be in with a chance to win a copy, simply answer this question…

On which date did the charge of the light brigade take place?

Send your answers to stephanie@dragoonpublishing.com!