Check out this month fantastic subscription gift! Brought to you by A.L Berridge, grab yourselves two of her popular published works for FREE by subscribing to Skirmish Magazine today!

Honour and the Sword, published by Michael Joseph, is the first in a series set in 17th century France, in the peak of the 30 years war. Spanish armies swarm out of the Artois region of the Netherlands and into Louis XIII’s France. Only the sleepy border of Dax-en-roi stands in their way.  The Chevalier de Roland rises to the challenge but the household guard is no match for the invaders.  Only one survivor escapes the brutality – a young boy named Andre de Roland – the new Sieur of Dax. 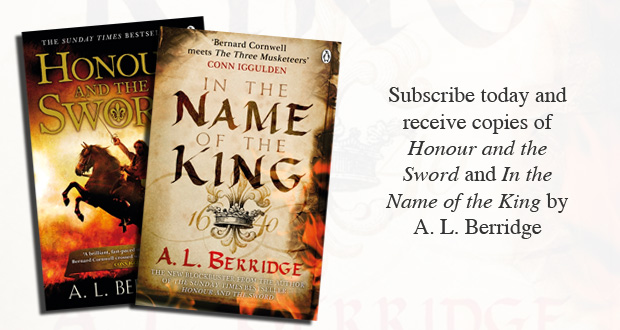 In the Name of the King published by Penguin is the follow up to Honour and the Sword. Across the ravaged countryside, soldiers are mustering in vast camps to resist the might of Spain at Arras. None realize the real threat of invasion comes from behind them, or that its roots reach as far as Paris itself.

The young Chevalier de Roland has scarcely set foot in the city before he crosses swords with a cruel nobleman to defend a young woman’s honour. Too late he learns he has stumbled on a conspiracy within the King’s own household to seize power by secret alliance with Spain. Accused of treason and forced to flee into hiding, André must fight on alone, staking both his life and his honour in the battle to save France.